There can be no real discussion alluding to cotton growing and the production of it without a basic knowledge of Genetically Modified Cotton (GMO) seed and this seeds’ effect on all aspects of cotton growing in India.

There is only one player worth noting in this game and it goes by the name of Monsanto. Monsanto and its subsidiaries (and there are many), totally dominate the Indian cotton growing scene. They control 98% of the Indian cotton seed market. Monsanto has won landmark court decisions in India allowing it to retain and monopolise its position as undisputed leader in the field of cotton seed production and marketing. Monsanto is the world leader in supplying GMO cotton seed in China, the USA and of course India. In the USA alone, 92% of all cotton grown is grown using genetically modified seeds.

Bt cotton is a genetically modified crop. … Bt stands for Bacillus thuringiensis – a soil bacterium which contains a toxic gene called Bt gene. The aim is to make the cotton crop resistant to bollworm. Hence through genetic engineering the gene is inserted into the cotton seed.
In a nutshell Bt cotton is a genetically modified organism or genetically modified pest resistant plant cotton variety, which produces an insecticide to combat bollworm. GM cotton is engineered with one of two traits. One makes it resistant to glyphosate-based herbicides such as Monsanto’s Roundup, while the other stimulates the plant to produce a toxin that kills the bollworm. This pest-resistant cotton is engineered with a gene from the bacteria Bacillus thurengiensis or “Bt”, and is the more commonly grown of the two types.

Adult bollworms lay their eggs on cotton bolls; once hatched, the larvae eat the seeds and damage the fibres of the cotton, drastically reducing cotton yields in the affected fields. This can produce catastrophic consequences for poor Indian marginal farmers already burdened by the triple evils of high loan interest rates, high seed costs and high pesticide costs.

There can be no better way to illustrate the dilemma facing Indian cotton farmers from the monopolising of their seed supply, than to refer to the next set of figures. 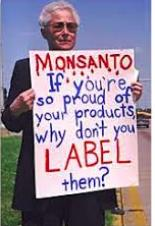 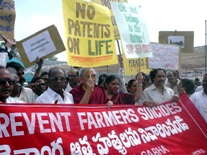 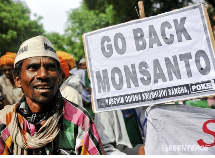 We at BellaBabyOrganic believe that the above says it all.
Insect-resistant Bt cotton is the only GM crop currently grown in India. It was introduced in India by Monsanto in 2002, under the trade name Bollgard, in a joint venture with the Indian seed company Mahyco.

If the farmer buys these genetically modified seeds, can he save seeds from the grown cotton to plant his next crop?
The answer is a simple NO.
The seeds will germinate and grow just like any other plant. This idea presumably has its roots in a real genetic modification (dubbed the Terminator Gene by anti-biotech activists) that can make a plant produce sterile seeds and as would be expected Monsanto owns the patent on this technique. Can farmers save their own seed and plant their own crops? This appears on the surface to be a reasonably simple question, though the answer is far from simple.
While saving seed and even exchanging seed with other farmers for biodiversity purposes has been a traditional practice, these practices have become illegal for the plant varieties that are patented or otherwise owned by some entity (often a corporation. There are legal moves afoot in India and elsewhere that propose that cotton farmers who store up their own seed would be liable to pay seed companies a royalty for doing this, thus making the ancient practice of seed saving and reusing illegal.
Can this be possible?
Monsanto instigated 92 cases of this nature in the USA in more recent times and WON every one of them and collecting $24 million US dollars for their trouble. 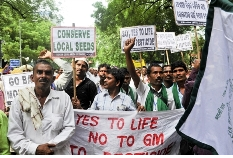 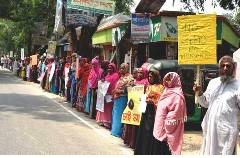 The above discussion was only meant to be an introduction to an incredibly complex set of issues all interwoven in the fabric of cotton growing and production.
The real crux of the matter is, do these genetically modified seed varieties work. From all reports and there are many, it would seem that the “jury is definitely still out on this one.”

Monsanto promised Indian farmers that Bt cotton would:
1. Reduce the amount of pesticides farmers need to buy to control pests,
2. Increase harvests and farm income by reducing crop losses due to pest attacks.

In the first few years after Bt cotton was commercialized in India, some farmers saw reductions in pesticide use and crop losses, but this pattern quickly and dramatically changed.

It is beyond the scope of this BLOG to go into a detailed analysis of the above points of the failure of Bt cotton to improve the lot of Indian cotton growers. It is suffice to say that it is total travesty of human justice and an insight to company greed that knows no bounds.
How can anyone help in such circumstances? How can a tide so powerful be turned?
Who knows? All that can be said, is that a start must be made, and to that affect it is being made. It is being made by small groups of farmers from all over India who have the courage and foresight to grow Organic Cotton crops. They are truly swimming against the tide and we at BellaBabyOrganic unreservedly believe that we must support their efforts in anyway that we can.

CHOOSING ORGANIC IS A WAY OF LIFE.